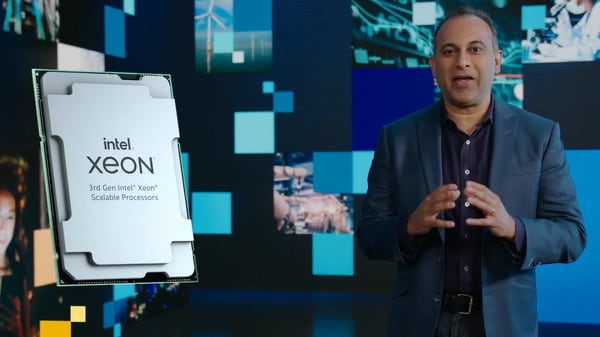 Built on the company’s basic Ice Lake-SP, the new processor is made with 10nm process technology – Intel says these are the first data center CPUs in its 10nm process. Each processor socket offers up to 6 terabytes of system memory, eight DDR4-3200 memory channels, and up to 64 channels on PCIe Gen4, according to the company.

Building on improvements made to the company’s previous offerings, Intel claims to have made improvements across the board including built-in AI acceleration, security and crypto acceleration. Contrary to 28 cores per single processor in a previous generation processor, Intel increased the base number to 40 cores per processor. It should be noted that this is a long way from EPDC’s AMD speaker, which supports 64 cores.

Intel says it has partnered with more than 50 Original Equipment Manufacturers (OEMs) to ensure it launches on their platforms – while working with all major cloud service providers of Ice Lake-powered services.

The company is also focused on improving operational security and cryptography with this year’s portfolio. The company prides itself on the new Crypto Acceleration regulations (first announced in 2018), which says it will maintain system performance and response times while working hard on encryption-related tasks.

The new generation of Ice Lake CPUs is also proud of the Software Guard Extensions upgrade to protect sensitive code, split protection and split up to 1TB code and new features such as Total Memory Encryption and Platform Firmware Resilience.

As the only CPU database CPU with built-in AI acceleration, the company claims to be able to deliver AI performance by 74 percent faster, with 1.5 times the efficiency of a mix of 20 AI-enabled tasks – compared to previous generations. Ahead of the network, the company says compared to the previous generation, the new 3rd Gen processors promise 62% performance on average, on large networks and handling 5G workloads.

“Our 3rd Gen Intel Xeon Scalable platform is the most flexible and efficient in our history, designed to manage the diversity of workloads from cloud to network,” said Navin Shenoy, senior vice president and general manager of Data Platforms Group at Intel. introduced.