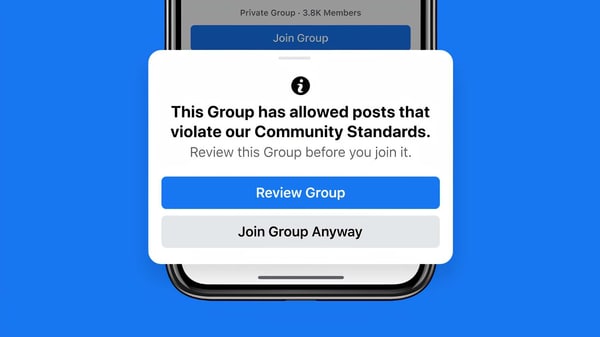 Facebook groups are home to some of the most popular platform groups that allow users to meet like-minded people for a variety of purposes such as self-improvement, or discussions about technology and current issues. However, the platform also has a host of dangerous groups that promote ignorance, hatred and violence, which has led the company to make some changes in how it strengthens its Community Standards by groups.

On Wednesday, the company announced it was attacking groups that repeatedly violated the Facebook Community Standards while making it difficult to find certain types of groups, in a post explaining the changes to its blog. The company said it would “reduce rights” for those who break the rules, in the ways described below.

The company explains that it will warn users about a group that has repeatedly violated Community Standards if they try to join it. “This group has approved posts that violate our Community Communities,” explains the message that pops up, asking users to “review” the group and choose from two options – the Review Group and joining the group anyway.

As part of a new campaign, users who continue to break the company’s Community Standards will find that they can’t post to a group, comment on another post, start new groups or invite users to join a new group. The decision of the social network to hold individual members accountable is significant, given the way false information is still being spread by individual users in annoying groups.

In the meantime, any party with a large number of members violating Community Standards will initiate a situation forcing the party president and owners to approve all submissions from the party. These moderators will have to watch out for the group to have problematic content, otherwise Facebook will simply drop the groups. Facebook says the new changes will take effect in many countries in the coming months.